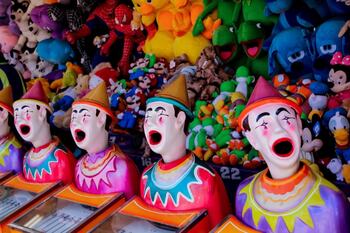 Gamification is evolving from an experimental business strategy to being a mainstream marketing tactic. Much of this is due to the fact that digital connectivity has made games more accessible; no more setting up a board game nor taking a trip to Las Vegas or the nearest thoroughbred track, nor does it require the complex distribution of printed materials such as game pieces, it’s now as easy as opening an app on your phone or sitting in front of your PC/console. This blog post explains why gamification and variable rewards can be a powerful marketing tool especially with respect to creating successful rewards and loyalty programs.

Gamification is one of the fastest growing marketing technology trends. It takes what we like about games and incorporates these features into everyday activities to make them more exciting and engaging. With the mainstream adoption of mobile smartphones and social media, we are seeing a powerful convergence of loyalty programs, engagement and gamification.

Many leading brands are introducing gamification into their loyalty programs. They find that it can be a powerful strategy to engage customers and inspire loyalty. The game can be as simple as receiving tokens, or “Stars” as is the case with the Starbucks, with every purchase that can be used to trade for increasingly rich rewards. Or, as complex as McDonald’s famous Monopoly that used stickers that revealed instant rewards and combined for bigger prizes.

There are many optional components to gamify rewards:

Each of these methods can engage your customers and drive more revenue through increased purchase frequency and a higher level of spend. The author of Hooked: How to Build Habit-Forming Products describes techniques used by marketers to engage consumers in “hook-cycles” with the goal of bringing them back over and over without spending huge amounts on advertising or aggressive, brand-damaging, advertising. The model describes an infinite model where a Trigger, leads to an Action, which results in a Reward, and then an Investment. Increasingly, a marketer’s ability to understand and utilize this model will be a key to marketplace success. The reward is a critical component in establishing and reinforcing the habit, and ensuring these rewards are variable if critical to program success.

A variable reward is when the scheduling or the amount of the reward is unpredictable. In the context of gaming, variable rewards tap into the deepest aspects of human psychology. The concept of variable rewards was first documented by B. F. Skinner, in the 1950s. Skinner proved with animal experiments that dopamine, the neurotransmitter that drives us to seek out rewards, is released in the brain in greater quantities when rewards are unpredictable. A good example are slot machines. Players have no way of knowing how many times they have to play before they win. All they know is that eventually, a play will win. This is why slot machines are so effective at generating revenue despite the fact that, in the long run, nearly everyone loses. There is always the possibility that the next coin they put in will be the winning one.

Variable rewards leverage our brain’s cognitive nemesis in that our minds make deduction of cause and effect a priority over other functions like self-control and moderation. The power of variable rewards is well summed up by Dr. Robert M. Sapolsky (Source: YouTube):

“Maybe” is a powerful emotion – it’s the reason that millions of people buy tickets for lotteries they have virtually no chance of winning. With variable rewards, the possibility of receiving something wonderful produces nearly the same dopamine levels as actually receiving it.”

The Power of Combining Variable Rewards and Gamification

So, the science says rewards are more powerful when they are unpredictable. In practice what this means is that you can leverage your promotional dollars by incorporating variable rewards into your program. Using variable rewards enables you to positively engage your customers for a lower cost. For example, rather than offering 10% cashback to every customer, via a coupon or an advertisement, offer your customers a game to play that gives them the opportunity to get more than 10% back – say up to 100%. On average you may only invest of 8% cashback into the program, but the result is likely to generate more positive engagement and excitement than a flat 10% cashback.

As well as leveraging your promotional dollars and the positive engagement, games that incorporate variable rewards also have another significant benefit for brands. The rewards earned are not perceived as a discount and therefore price/value is maintained. Games with variable rewards are a great way to avoid the discounting death spiral that plagues so many retailers.

HOW SPINDY LEVERAGES GAMIFICATION AND RETAIL REWARDS FOR OUR RETAIL PARTNERS

Our retail partners determine the average amount they would like to return to their customers. The spindy algorithm works in the background to ensure that every wheel spin returns between 1% and 100%, but on average, the agreed percent is given in the form of cashback to the consumer.

Spindy leverages gamification via the wheel spin and variable rewards by promising 1% to 100% cashback. As a result, retailers engage consumers and, through the power of variable rewards, leverage their cashback dollars for greater impact.

Hopefully you can see how important gamification and variable rewards can be in retaining customers and in driving revenue cost effectively. I hope it’s got you thinking about how you can effectively implement these strategies into your own customer loyalty program. If you think spindy may help your business “hook” your customers, please don’t hesitate to reach out.

Contact spindy if you have questions or comments about this article.